Sat 10 December 2022 10:00am- 4:00pm
Hampshire Flora Group
Annual Exhibition Meeting
Venue: Testwood Lakes Centre. A chance for local botanists (and others from out ...

Mon 19 December 2022 10:00am
BSBI Recording
Juniper census, Broughton Down
Leader: Martin Rand. This is a personal trip for a limited number of people and ...

Mon 16 January 2023 10:00am
BSBI Recording
Juniper census, Chalton and Woodcroft
Leader: Martin Rand. This is a personal trip for a limited number of people and ...

The Botanical Society of Britain and Ireland (BSBI) is a society for anyone with an interest in the flowering plants and other vascular plants (conifers, ferns, horsetails and their relatives) in Britain. It is open to professionals and amateurs. It can trace its origins back nearly 170 years, and remains the biggest and most active organization for botanical studies in Britain and Ireland. 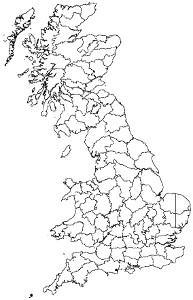 In the second half of the 19th century, the botanist Hewett Cottrell Watson sought a way to describe the distribution of British plants in a precise, consistent manner. He came up with a scheme of vice-counties based on the county boundaries as they were in his day. To make the areas fairly even in size, he divided up larger counties and he merged tiny ones with one of their neighbours. For instance, Hampshire (as it then was) became vice-counties 10 (Isle of Wight), 11 (South Hampshire) and 12 (North Hampshire), while Rutland became part of vice-county 55 with Leicestershire. This system was soon adopted by other biologists and naturalists.

Why do we need vice-counties?

Although most modern distribution mapping of species at the national level is now done at a much finer scale, using the 10km x 10km squares of the Ordnance Survey National Grid, the vice-county system is still in use alongside it. For one thing, many older records and specimens can't be referenced to the National Grid. But the most important feature for present-day naturalists is that the boundaries are fixed. This contrasts with current administrative county boundaries that often change when local government is reorganised.

The two Recorders for mainland Hampshire have responsibility for the two vice-counties of South and North Hampshire, but we also deal with local authorities and organisations like the Hampshire Wildlife Trust, which operate within modern administrative boundaries. So we take an interest in bits of administrative Hampshire that are not strictly part of our BSBI remit.

Hampshire: the county and the vice-counties

This map shows the administrative boundaries of Hampshire (together with the cities of Portsmouth and Southampton), combined with the botanical vice-county boundaries.

The BSBI in Hampshire 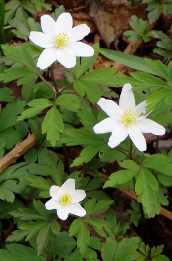 The Botanical Society of Britain and Ireland has a national network of Recorders, each responsible for plant records in his or her area.

What do the recorders do?

Our most important job is to preserve and maintain an archive of botanical records made within the county. To give you some idea of the scale of this task, we currently have over 1,600,000 Hampshire records computerised, with a much smaller number as yet only on recording cards or paper.

This information is made available in various forms to organizations concerned with studying, monitoring or conserving Hampshire's flora. If you are undertaking a study for non-commercial research or conservation purposes, we may be able to supply selected data to you at no charge. If your study is part of a national initative, contact the BSBI Coordinator in the first instance. Enquiries from commercial consultants and organizations should go to the same person, or to Hampshire Biodiversity Information Centre with whom we share all our data.

We also help to organize national BSBI projects at the local level. In recent years the most important of these have been:

We are always pleased to receive plant records and we will happily participate in surveys and inspections if you think you have an interesting plant or a valuable plant site. We will help in getting plants correctly identified, but please remember that our time is limited and priority goes to BSBI members. Also do please be patient if you don't always get an immediate reply; we'll try not to forget you!

For details of all current projects in the county, see the Projects menu.